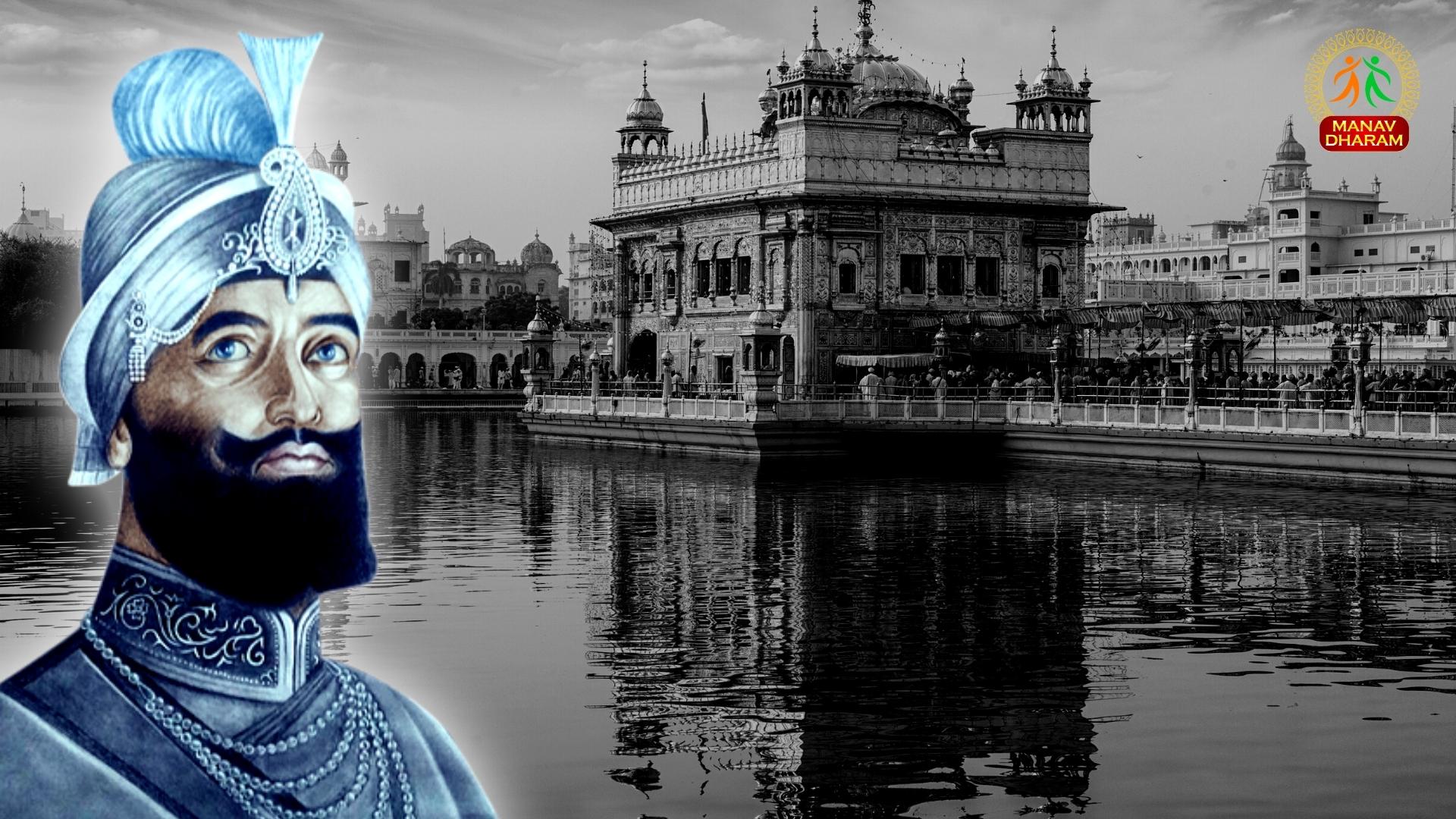 Guru Gobind Singh was the Tenth and the last Sikh Guru who was a multi-talented warrior Spiritual Master. He was born on 5th January, 1666 as Gobind Rai in Patna, Bihar as the only son of Guru Tegh Bahadur, the ninth Sikh guru and Mata Gujri.  He was installed as the tenth Sikh Guru on Vaisakhi on 29th March, 1676 at the early age of nine after the martyrdom of his father Guru Tegh Bahadur who was beheaded under the orders of Aurangzeb for refusing to convert to Islam, during the prevailing conflict between Sikhs and the Islamic Empire.

Among Guru Gobind Singh’s notable contributions to Sikhism was that he founded the Khalsa community in 1699 at Anandpur Sahib with volunteers whom he called Panj Pyaare (five beloved ones), and laid down the holy book, Guru Granth Sahib as the guiding light for Sikhs. He introduced the five K’s, which are the five articles of faith that Khalsa Sikhs wear to all times – Kesh: long hair and beard; Kangha: a wooden comb; Kara: an iron or steel bracelet; Kripan: a sword or dagger and Kacchera: a short breech. With this, a new movement was born consisting of fearless soldiers who believed in righteousness and their holy duty was to protect the poor and oppressed. Guru Gobind Singh ended the distinction of caste and creed and gave a new identity to his followers, inspiring them to lead a life with high moral values.

Guru Gobind Singh’s entire family sacrificed their lives for the cause of truth, justice and equality. He himself left this world on October 7, 1708 in Maharashtra and before his death declared that there would be no living Guru after him, and that all spiritual guidance would be obtained from the Holy Book, Guru Granth Sahib.

Guru Gobind Singh’s basic philosophy is centred around love. According to him, love is love and there are no restrictions and hierarchy in it. His heart was like the heart of a mother. This was the reason why his thoughts and actions were directed from his heart which had no place for ego, pride, prejudice and anger. He believed in simplicity with openness and acceptance towards all, beyond caste, creed, nationality, race and gender, so that we grow in oneness in the beautiful atmosphere of unity.

Guru Gobind Singh felt deeply for the poor and downtrodden. One of his many teachings, as written in the Guru Granth Sahib, is “One who performs selfless service, without thought of reward, shall attain his Lord and Master.” Guru Gobind Singh said, “I shall clothe you in fair garments of joy. You may give one shirt today or one sari, but after some time they wear out. But the Divine Master gives us the garments of joy. When one puts on the garment of joy, how handsome one is. How joyful one is, how dynamic one is!” He further said that “I shall invoke the fire of heaven to mingle with your blood.” Today we need to understand what is that fire of heaven? When we dig deeper into spirituality, we find that it is in fact the Divinity within us, the supreme consciousness within us, in fact it is the God who resides within each one of us.

Importance of the Guru

Guru Gobind Singh believed in keeping the ‘Guru’ in one’s heart all the time and following his teachings and directions. He taught that one needs to be one with the Master and only then can one find oneness with God. Till the time we are separate from our Master and consider ourselves different from our Guru, we have a long way to go in our spiritual path. When we are in connected in thought and actions with our Guru, we are connected with the supreme being.

On 30th March, 1699, Guru Gobind Singh gathered his followers and asked for a volunteer to sacrifice his head. The followers were surprised to hear this but one disciple by the name of Daya Ram readily offered his head. Guru Gobind Singh took him inside a tent and after sometime emerged with a sword covered in blood. He again asked for a volunteer and repeated the process. This happened for five times. At last, Guru Gobind Singh emerged from the tent with the five volunteers, who to the surprise of all the other followers, were very much alive. These five Sikh volunteers were named as Panj Pyaare or ‘five beloved ones’ by the Guru as they were willing to give their lives for the word of their Guru. He surnamed all of them as ‘Singh’, which means ‘lion’.  To this day, these five disciples are known for their unwavering faith and dedication towards their Master, which was a valuable teaching demonstrated by Guru Gobind Singh.

The life of any Spiritual Master is a message in itself. We can learn from their actions, deeds and lives, but also from the scriptures or books written by them or their followers. As a Spiritual Master, Guru Gobind Singh’s teachings remind us of three things that are essential for each one of us to learn:

The Spiritual Master makes us realise that without the supreme Knowledge we are slaves to our desires. Ignorance makes us blind to this fact and we remain embroiled within our materialistic world.

‘Be a master and not a slave’

Guru Gobind Singh inspired his followers to be their own master by controlling their desires and wants. He encouraged them to be fearless and have courage to break the bondage of being dictated, dominated and directed. The Bhagavad Gita also mentions that an aspirant or a seeker must never have doubt, fear and suspicion. One can never progress on the spiritual path if they have these worst enemies.

Guru Gobind Singh stressed that people should not be disturbed or upset by unfavourable circumstances, but overcome them by remaining unaffected and balanced. For this one needs to master the mind; that is, our desires and get rid of our animalistic appetites for example, eating or sleeping too much. In doing so, we can become a master and not a slave.

‘The hands that serve are holier than the lips that pray’

Guru Gobind Singh was a seer with vision and fortitude. He encouraged humanity to realise the divinity that lies within everyone. He believed in the service of the poor and needy people.

Today, reflecting on the life and teachings of Guru Gobind Singh, we revere him as a Guru who sacrificed his family and still worked tirelessly for the sake of equality amongst all and the spiritual upliftment of mankind by realising the divinity within. It is well-known that divinity cannot be comprehended by words however hard we try. It is something that is realised and experienced. We pay tribute to great masters like Guru Gobind Singh for the sacrifices they made for the sake of the betterment of all.

Following the footsteps of Great Masters

What better way to pay our respect to great Masters of the past, than by inculcating their teachings in our lives?  Shri Satpal Ji Maharaj, the living Spiritual Master of the current times and founder of Manav Utthan Sewa Samiti is constantly reminding humanity to be humble in our ways, maintain goodwill towards all and serve the needy. He is a spiritual scientist who teaches no creed, sets up no sect, binds men neither in dogmas nor rituals. He inspires one and all to free oneself from bondages that keep us confined to the layers of ignorance by realising their true potential through Spiritual Knowledge.

As Guru Gobind Singh said, “Blessed, blessed is the True Guru, who has given the supreme gift of the Name of the Lord.”

We must make an effort to find that Guru who imparts the true Name of the Lord, the Word of God. The same word that Guru Nanak talked about when he said, “Earth, sky and light are produced by the Word. All of creation emanates from the Word. Nanak says, the Word is present in every heart.” Shri Satpal Ji Maharaj’s motto in life is to enlighten man and enlighten the Universe, by making this Name of God accessible to one and all.

To understand the deeper meaning of life, which is the gateway to eternal freedom, and for us to benefit from the golden opportunity provided to us in this lifetime to discover God, we can follow the footsteps of great men and achieve what they inspired us towards. Every human being is entitled to have the experience of the Divine if they truly seek it. So, let us aim to experience the Divinity within and be a master and not slave anymore.